In history of modern architecture Frank Lloyd Wright is known as a pioneer in designing houses in respect and harmony with nature. His main works he created in the first decades of last century, exactly the architecture period of breaking with nature (you will find more about this in former articles).
In the following article out of his blog architect and Feng Shui master Howard Choy describes his point of view in a little discussion about “Fallingwater”, a famous work of Frank Lloyd Wright in the late thirties:

Frank Lloyd Wright and Feng Shui by Howard Choy
“… Having just visited some of Frank Lloyd Wright’s (FLW) buildings in the States (Guggenheim Museum in New York, Fallingwater along Bear Run and the I. N. Hagan House at Kentuck Knob) during our recent Easter holidays, I have found both Cate Bramble and Xu Weili’s comments below misleading:

In reality both FLW and the practice of feng shui are concerned with Man’s relationship to his environment, both wanted the occupants to live in harmony with Nature, but they have a different approach to this relationship, in which FLW viewed man as the “host” and Nature as the “guest”, whereas in the practice of feng shui, Nature is considered as the “host” and Man as the “guest”.
In a traditional Chinese worldview, man is always subordinate to Nature but in FLW’s case, Nature is there to serve Man (to make his house stand out) ...
PS. Originally FLW’s client wanted to site the house further down stream, where as a kid he used to play there and look at the waterfall, instead FLW put the house on top of the waterfall so it becomes “being looked at” rather than “looking at”. In other words Nature, in the form of a waterfall, became a “servant” of his house instead of an equal partner talking to each other.”      (Howard Choy) 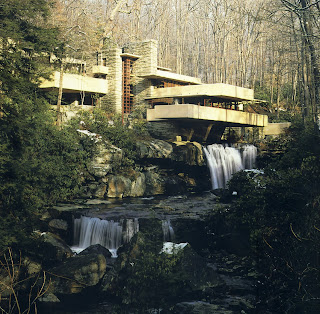 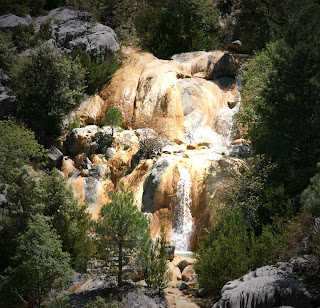